Tips on How to Cover Up a Tattoo 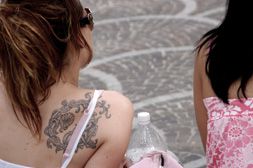 Getting a tattoo inked on the body is one of the coolest ways to look stylish. Having a tattoo is a trend for women in present generation. They think that having a tattoo makes them look beautiful and funky. But if you get a tattoo inked, then it will remain onto your body forever. It is possible to remove it permanently by using lasers but in this method there are chances of getting the skin damaged. It is a very expensive method too and the pain induced in the body during this method is non sustainable. There are many other methods using which we can remove a tattoo permanently.

Getting a tattoo inked means having a tattoo for a lifetime. Many women like to have a tattoo and that it why they get it inked. But sometimes some occasions happen in which exposure of tattoo doesn’t look good. Also if you have a tattoo and your job doesn’t allow you to expose it, then you will have to conceal it. These are the times when you will have to remove your tattoo. At this time, it is better to hide the tattoo temporarily. Makeup can be used to cover it up. When using makeup to conceal a tattoo, it is important to select the shade of foundation and concealer properly. Liquid foundation of lighter tone than your skin color should be used. Apply the first coat of liquid foundation on the tattoo and leave it to set. After it dries out, apply second coat. When we do makeup on the face, we use concealer to hide the dark circles under the eyes and after the foundation has been applied. In similar manner apply concealer on the tattoo. The shade of the concealer should be one or two tone lighter than your skin tone. When applying the concealer make sure it blends with the foundation properly. As the foundation and concealer leave a shiny effect on the skin, dab some powder to make it look normal. In this you can hide the tattoo using makeup. If you want to remove the makeup from the tattoo, then it can be done by using alcohol. Using makeup is the easiest way to cover up the tattoo. When using makeup to cover a tattoo, make sure you wear clothes in such a way that they don’t cover the skin where makeup is applied or else you will have to do a touchup quickly.

Sometimes a situation can be that the tattoo which you already have on the body, you don’t like it anymore and want some other one in that place. If the original tattoo is small in size then a tattoo of bigger size can be used to cover that old one. The new tattoo should be such that it covers the old one completely. Make sure the colors used in old tattoo are concealed with the colors of the new one.

Having a tattoo looks fashionable. But there are times when it becomes necessary to hide the tattoo. Instead of going with permanent techniques, you can choose the temporary ones. They are easy to be applied and can also be removed easily. Now covering a tattoo has become easy.

How to do Manicure at Home

Tips on How to Look Slimmer Than You Are